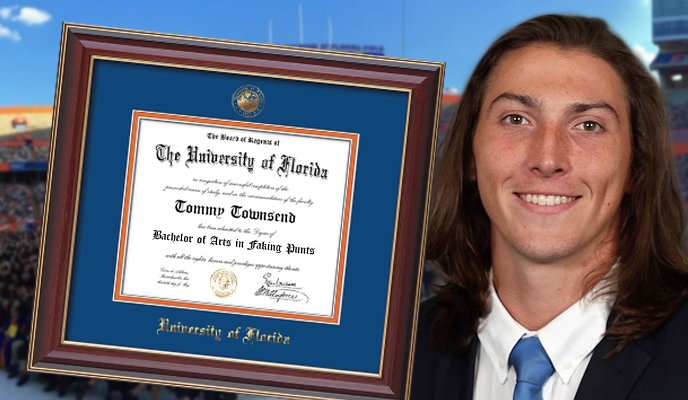 While the Gator Nation tries to collectively lower their heart rates after a traumatizing victory over Miami, one football player is preparing to receive an honorary degree for his performance.

Tommy Townsend, star punter for the Gators, has been chosen by the College of Liberal Arts and Sciences to receive a Bachelors’ degree in theater performance after effortlessly selling a fake punt Saturday night.

“Usually we require somewhere between 30-120 credits before graduating with this major, but Tommy really earned it,” stated Jacinta James, President of the School of Theater and Dance.

“I know students at Miami aren’t as bright as they are here, but every Miami player truly believed Tommy was going to punt that football. It was like Hamilton, just with a tad bit more football.”

Though most of the University and college football sphere were mesmerized by his majestic 17-yard sprint, Townsend said he has spent years preparing himself for this moment.

“The coaches don’t allow me to watch game film or hang out with the team because I’m on Special Teams, so I usually spend that time watching Broadway musicals to study their body language.”

Tommy mentioned that although none of his favorite musicals actually involve football, Cats, Phanton of the Opera, and Wicked were just a few of his favorites he credits for helping him craft a perfect fake punt.

With the immense success of Townsends’ one highlight play, coach Dan Mullen was asked how he felt about Townsend, and gave a sincere, heartfelt statement on the new fan-favorite.

“I have never seen this kid in my entire life, but wow, what a phenomenal performance” exclaimed Dan Mullen as he put his arms around Townsend. “We always knew Johnny had it in him.”