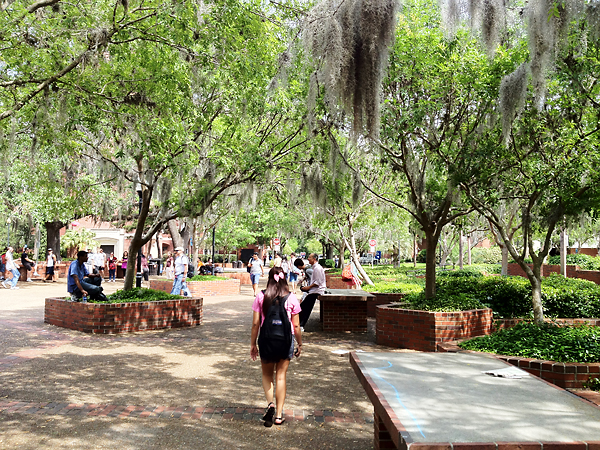 “Move!” he shouted as a startled biker darted out of the way.

I have two minutes to get to Weil Hall!”

Ortiz, 19, a UF industrial engineering sophomore, is merely one of the hundreds of students who find themselves needing to hustle to get to class each day.

According to studentswhoruntoclass.org, 75% of all college students will find themselves needing to run to class at some point in their life. This event is usually followed with extreme exhaustion, perspiration and shame.

“I was on time, I don’t know what you’re talking about,” Ethan Miller huffed as he took a seat just as his Good Life discussion section began. “I would never be one of those losers who sprint through campus.”

The first-year economics major paused to wipe sweat from his brow and take a swig of water.

Although some students may find it embarrassing to admit they had to run to class, studentswhoruntoclass.org points out acceptance is another step on the road to recovery.

Running to class is a normal thing, just like puberty and getting stood up by your Tinder date,”

said Dr. Adren Gnapoor, a sociologist who studied at Harvard.

“After studying numerous instances in which students were forced to run to class, it seems as if it mostly happens whenever the student’s bookbag was at its maximum weight,” Gnapoor said.

“If anything, it teaches you how to learn to deal with embarrassment as people laugh at you when you sprint by,” Gnapoor said. “I mean, I turned out OK.”

“Yeah, I mean I could get to class with like seven minutes to spare, but then I would have to give up my Peach Delight from Jamba Juice,” Boothsby, a UF political science junior said.

I like to think of it as my daily workout,”

Ortiz made it to class with 15 seconds to spare and sighed aloud as he realized he made it.

“Yeah, I’ll run to class if I have to,” Ortiz said. “But if I have to catch the bus? You best be sure I’ll sprint down to the stop.”