Home Articles Student Officially Out of Excuses For Not Starting Podcast 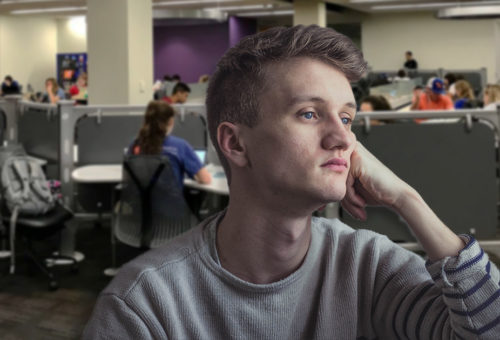 If you go to a party with Martin Podoco, 22, you’re going to hear about his podcast ideas. He’s been talking about starting a podcast for as long as his friends can remember, and he finally has a chance to make his dream a reality.

With Marston’s new set of podcasting kits, anyone with a Gator 1 has access to podcasting equipment, even if their idea sucks. We asked Podoco how he would use the kits, and we immediately regretted it.

He went on. I stopped taking notes.

Martin’s roommate, Cameron, doesn’t expect him to follow through and put out a podcast. He also made it clear that he hates every idea and hopes the world won’t be subjected to them.

“They’re all bad ideas, so I hope he doesn’t go through with it,” said Cameron. “But we should be safe, because he can’t accomplish anything.”

Podoco hasn’t made any progress towards producing a podcast in the past. Now that he has access to free microphones and other tools, we’ll see if he starts working toward his goal.

When asked about the concrete steps he plans on taking, Podoco fumbled around for reasons to put it off further. He cited difficult classes, having to go out of his way to get to Marston, and the possibility that he might apply for a part-time job sometime in the near future.

“I’m taking 9 credits already, so it would be tough to commit time every week,” said Podoco. “And I hardly ever go to class, so I’d have to get on the bus just to get to Marston.”

Maybe Podoco won’t make his weird, uninteresting ideas into a podcast. Let’s hope not. Even with the power to make every dumb idea into a weekly train wreck, it seems pure laziness may save us from creating the cringiest content.