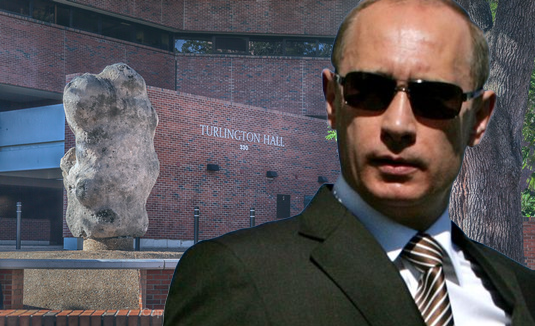 As the FBI’s investigation into Russian meddling heats up, an unexpected twist has pulled national attention towards the University of Florida. The investigation has uncovered an elaborate scheme by the Russian government to steal the beloved potato statue and convert it into vodka.

FBI Agent Gary Stevens, who uncovered the plot, was stunned and confused by the new discovery.

“It’s straight out of a James Bond movie. Not even one of the good ones either, one of the really stupid ones,” said Stevens. “Come on, Vlad. You can do better.”

The plan is thought to come directly from President Vladimir Putin himself. His motive was to strike one of the United States’ most beloved landmarks and turn it into a “symbol of Russian superiority”.

Among the documents uncovered was correspondence from Putin to the head of the Federal Security Service. In it, Putin writes, “The University of Florida, now ranked #8 in best public Universities, is a prime target. It is critical we take this icon of American democracy and subvert it. The potato must fall.”

Shockingly, The University of Florida claims to have been ahead of the Russian plot. According to Janet Dawson of the school of engineering, the administration has been expecting something like this for years.

“That potato statue is one of our most prized symbols, so of course we have done everything we could to protect it from the world,” said Dawson in an official statement.

According to Dawson, the circle surrounding the potato has hidden military-grade forcefield technology to protect it from any non-UF personnel. Anyone without a valid UF-ID that reaches within 5 feet of the potato will be instantly disintegrated.