Home Articles Pledge of Allegiance to be Replaced With Academic Honor Code at Football... 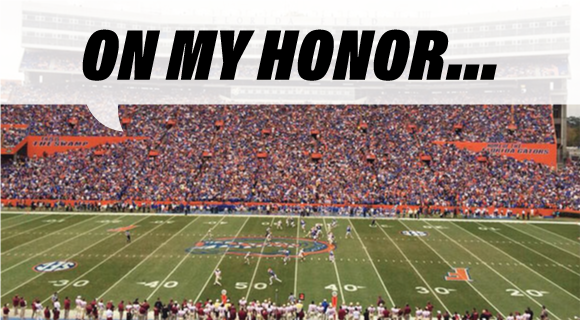 The University of Florida Athletic Association is partnering with the Dean of Students to make the experience at UF football games more exciting for all students.

In the past, the Pledge of Allegiance was recited by the “whole” stadium before the Gator Band played the National Anthem. Now students and alumni attending the game will hear the familiar words of the Academic Honor Code: “On my honor, I have neither given nor received unauthorized aid in doing this assignment.”

The office of the Dean of Students hopes that this new tradition will promote academic honesty and an emphasis on academics at University athletic events. The University Athletic Association believes that it is also important for the student athletes to view the games as assignments and avoid cheating.

“We hope that the students of this esteemed university embrace this bold new change,” said Jonathan Nair, spokesperson for the Dean of Students.

“Making the games feel similar to a class should really reinforce that fun, college atmosphere.”

Reciting of the Honor Code will be required and not participating will result in a grade of zero for the game. To keep up with this, all students have been added to a Canvas page for each football game and will need to read the syllabus and follow the guidelines about proper gameday etiquette such as no raucous behavior, and no cell phone use.

“I don’t think I’ll ever go to a game again unless they change it back,” said Ryan Meira, a 3rd year Political Science major and big supporter of the Pledge of Allegiance.

“That’s our country’s, like, favorite song or something. Go Gators and Go America! USA! USA!”

Meira claims he will only go to the games if the rest of his friend group goes because he has nothing else to do without them on Saturdays.

The next proposed change by the UAA is to install breathalyzers at each gate.