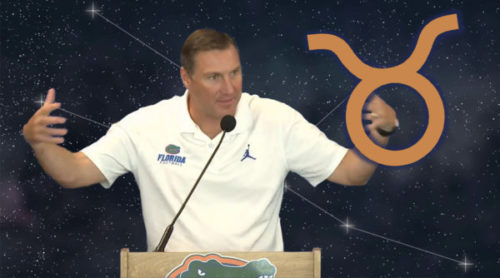 During his weekly post-game press conference, Head Football Coach Dan Mullen attributed the team’s good fortune on the moon’s position with relation to his zodiac sign.

“We had one hell of a game this weekend–everyone was performing and communicating beautifully,” said Mullen. “And all because the moon aligned with my sign.”

“Now everyone that knows me, knows damn well that I am a tried and trued Taurus,” he continued. “One—it’s clear in my attitude, I have the ‘great willpower’ needed to succeed. Two—nothing says a ‘preference for clear paths’ like 215 rushing yards against a dominant SEC defense. And three—you better believe that I customarily ‘disliked and opposed change’ after Franks’ early third quarter interception in the end-zone. Do you really need more evidence? It’s science, people.”

“Being a Taurus, I am symbolized by the bull—the ideal spirit animal for a serious division one football coach, okay? And you can’t tell me that this week’s victory, which was aided by our performance, shouldn’t be completely attributed to the moon’s entrance of Taurus, because frankly you’d be completely irrational to assume so.”

When it came time to take questions, some jerk-off know-nothing Scorpio reporter had questions regarding numerology: “Coach, I want to congratulate you on your very unlikely win, considering you did beat a team whose head coach, Ed Orgeron, a Leo, was born on July 27th, 1961, giving him a numerology value of 6. Meanwhile you were born April 27, 1972, which gives you only a numerology value of 5. This is clearly shows why you weren’t favored to win this weekend—“

“I’m gonna stop you right there because, like your chakras right now, you’re coming in way out of line,” Mullen interjected.

“First of all, you’re clearly some lost Virgo whose energy is all out of whack since the moon just entered Libra, so why don’t you follow your daily horoscope and see if you’re being fair to yourself before you come in here projecting your dark energy and ruining our up-beat vibe. For all of you out-of-touch VIRGOS out there, having a lower numerology value doesn’t correspond to strength—only personality! God! How many times do I have to explain this?!”

Mullen then took the time to hash out the origins of numerology and reciting the zodiac signs of key players like Quarterback Feleipe Franks and punter Tommy Townsend, as well as those of defensive coordinator Todd Grantham and offensive coordinator Billy Gonzales and John Hevesy. All the while, he intermittently spent his time linking the meanings of such signs and numbers with different play calls and statistics from Saturday’s performance.

“All of our horoscopes flowed together in harmony, because of my aligned Taurus moon energy which only got stronger throughout the course of the game,” he said.

When time came doc all it quits on the conference, Mullen was gracious: “Thanks for being present today, you guys, and sharing the joyous occasion of an impressive victory with me,” he concluded after a group “ohm” circuit. Then, while in downward dog, he finished with: “Let’s end this conference with a ten-minute vipassana. If you’ve already had your Vinyasa practice today, then Namaste y’all.”