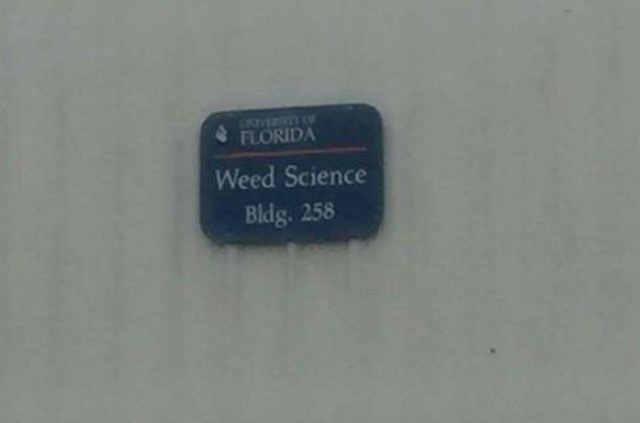 After years of being relentlessly mocked by faculty and passersby alike, The Institute of Food and Agricultural Science’s Weed Science building celebrated the telling of its billionth marijuana joke this past Saturday.

In what some might refer to as a joke, Bob Tennant, father of prospective UF student Justin Tennant, drove past the suspiciously windowless shed on Museum Drive on their way to attend a UF campus tour. Following what has become the rite of passage of thousands of parents before him, Tennant reportedly pointed to the sign on the building reading ‘Weed Science,’ while smirking and commenting

“Look son, they’ve got a major here just for you!”

“It was hard to keep track of which joke we could count as the billionth,”

admitted Weed Science research assistant Julie Thompson, who reported that it was unclear whether an attempt at a joke was being made every time a colleague requested to work on a “joint project,” needed to “be blunt,” or “hash something out.”

“Honestly, I’m surprised it took so long to get to this many jokes. UF wanted the program to be taken seriously, they could have given the building a better name,”

“Surely there must be a more academic term for the science of weeds, something that ends in an -ology or -onomy, right? But ‘Weed Science’ is the best they could come up with?”

Lead Weed Science Researcher Kenneth Schreiner said he was embarrassed by the amount of jokes being made at the programs expenses.

“I bet they don’t get this kind of crap in the Joint Care unit at the med school,”

“If I’m in one more person’s drive by Snapchat I’m taking that sign down myself.”

Further comment could not be obtained from graduate Weed Science student Brad Kohan, who, upon being told that the institute did not in fact study marijuana, quickly sprinted out of the building.