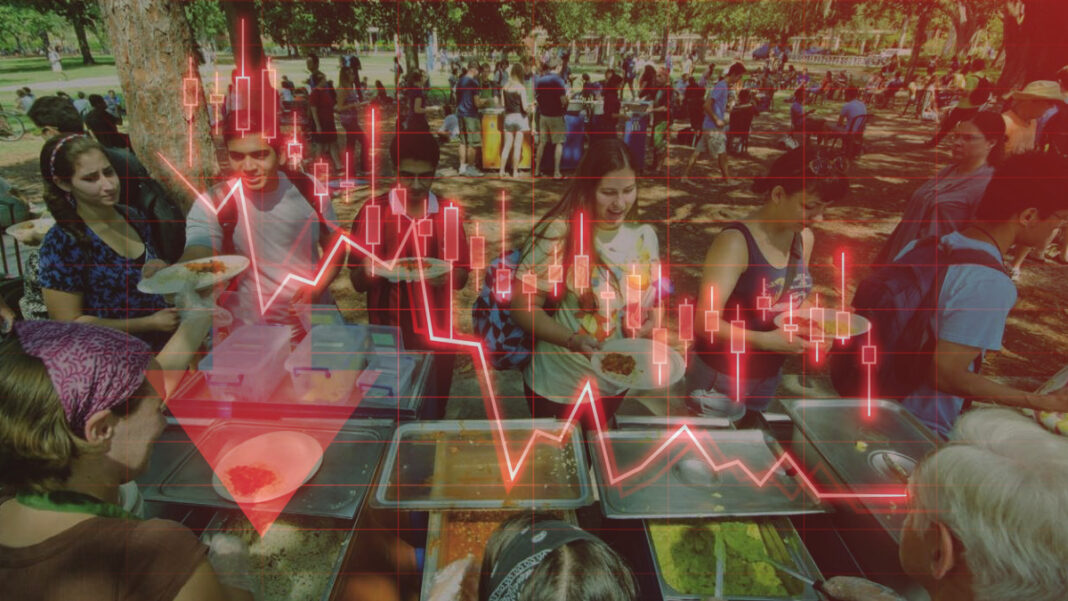 The city of Gainesville has been consumed by a frenzy of unemployment, inflation and rising store prices after Krishna lunch ruled out free refills last fall.

“They’ve made fools out of both us and our hard-earned money!” wrote Brian Shelby, a business student. “What’s my $5 worth, if not a free refill?

Since the slashing of second helpings, changes have quickly rippled through the city. Relish has seen the price of their cheeseburgers double since the start of Spring semester. Mi Apa’s coffee has soared to almost six dollars for small. Italian Gator now charges extra for napkins and counts cheese as a “deluxe topping.”

Students have flocked to local restaurants in numbers higher than ever before, only to be turned away due to pickle and pepperoni shortages.

“The Krishna Lunch is the pillar of the Gainesville economy,”

“Once the change was made, there was no going back. It’s the domino effect on steroids. This could easily become a nationwide recession if we’re not careful.”

“I don’t even know who we are as a school anymore,” commented 2024 incoming freshman Sierra Needle. “Are we still the Gators? Are we?”

“Of course,” added Dr. Howard, “there are students who carry tupperwares to simply circumvent the refill rule. But we have to remember, all these tupperwares are weighing down the RTS – driving up gas prices and adding further damage.”

“We’re not sorry,” said Krishna staff in a facebook post. “We don’t really deal with the whole ‘money’ concept anyway. Love is always our number one intention. By the way, we will be upping our credit card fee to $1.50 until this all blows over.”