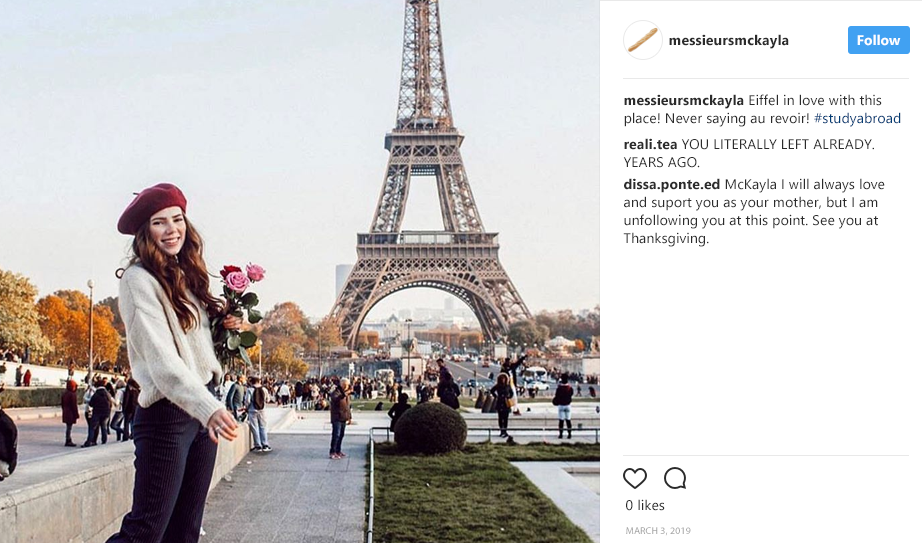 Studying abroad is an incredible opportunity that allows students to experience foreign food, culture, and education. For McKayla James, a grad student at the University of Florida, the trip was so memorable that it became a nuisance to anyone who makes her acquaintance.

James, who went on a two week, 1 credit study abroad to Provence, France, has posted 281 Instagram posts about her trip since returning in July 2014. Despite trying to be as creative as possible, most of her posts are titled “Never leaving this place” or “C’est la Vie”, even though she has literally been back for 4 1/2 years.

McKayla is still coming off of the cultural high of being abroad, but her friends on campus have reached a breaking point.

“She starts every conversation by retelling her trip all over again, but we’ve had enough. If she says bonjour to me in a Publix one more time I’m transferring,” said one of McKayla’s close friends who wishes to remain anonymous.

James’ friends have lost patience, but at least they stuck around. Ex-boyfriend Garret Masterson told us that her “exotic” two week trip is the sole reason the two broke up.

“Her Tinder profile said she was French so I thought it’d be cool to go out with a foreign girl. She had me fooled for about a month until I realized that she only knows 3 words in French and her family is from Iowa.”

Despite the criticism from almost everyone she knows, James has stayed strong through these tough times.

“I’ve been blocking out the haters for years”, said James, who went from 2,500 Instagram followers to 11 since she returned from her trip. “Its not my fault that I’m the most cultured person in my friend group, maybe they should travel halfway across the world to get one transfer credit in humanities, then talk to me.”