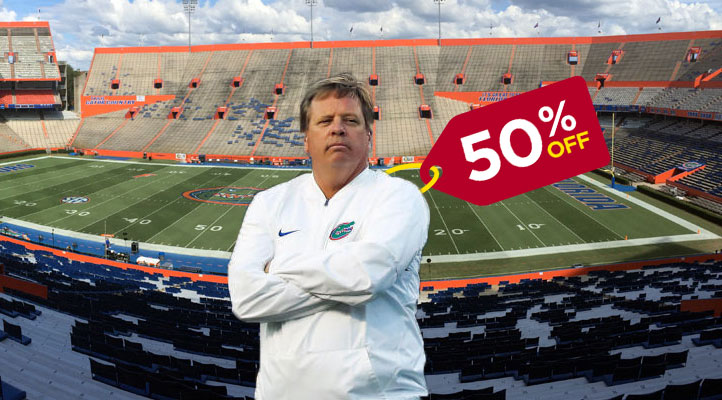 An official from UF has announced that in the midst of all the Black Friday deals and discounts they will be shopping for a new football coach.

Dan Turkin, Head of Sports Recruitment, said that typically the team uses more traditional methods to hire their staff, but due to recent circumstances they decided that they might as well take advantage of the holiday sales.

“Our plan is to shop around, we really want to make sure we’re getting a bargain here,”

Turkin said, who also plans to hit up Target later for an Xbox One.

“California is having a 50% off sale, but we also need to make sure they have a good return policy.”

Players on the football team said that they were a little concerned about what kind of coach they might be getting on a day like today, when competition is high. As kicker Eddie Pineiro pointed out, performing well under pressure has been a bit of a weak point for the Gators recently.

Some coaches are even cutting their buyout deal prices as an added incentive for the school to pick them up.

“Look, I saw what happened to Jim, but he got like ten million bucks for it,”

“I’m willing to take the risk that the entire school may turn on me at any point, for any reason though.”

Sources indicate that the Gators may be eyeing Chip Kelly, as well as a 36-tube value bag of chips at Sam’s Club. The coach may be a good value for the team, as he comes with the upgraded ESPN package and interview trash talk module.

Other deals that the University is looking to pick up include some extra Greek life students from FSU, and an additional Newell Hall to go right next to the one they have now.