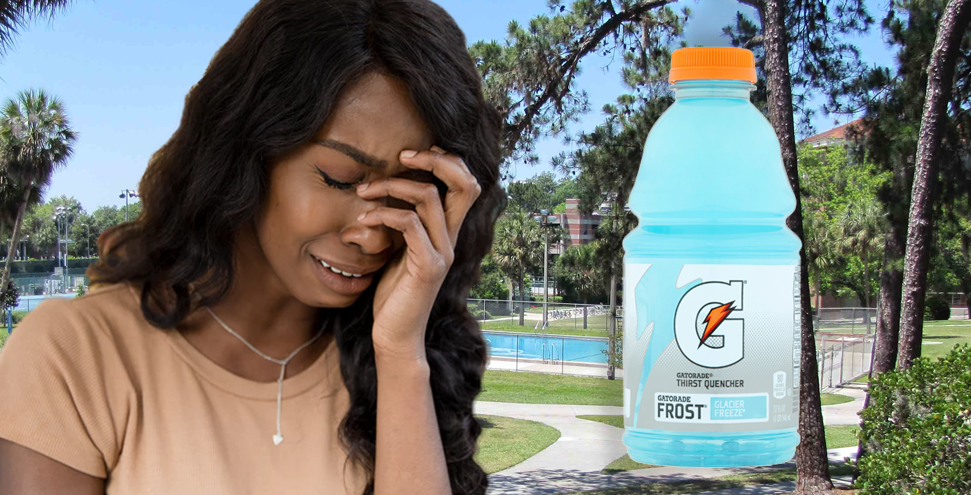 After years of speculation, Gatorade identified its main thirst-quenching ingredient in a press release last Wednesday. The company revealed that they’ve been harvesting and bottling UF freshmen’s tears for the popular sports drink.

“The tears of freshman have been, and always will be, a staple in our products,” said Jarred Triggs, a Gatorade representative. “Our research has proven that the unique lipids found in UF freshmen’s tears replenish electrolytes five times faster than any other known ingredient.”

Over 50% of UF freshman sign non-disclosure forms to work with the company. Now that Gatorade has freed them from their contractual silence, many of them are coming forward to speak about their experience.

“I signed on when my financial aid was delayed last semester, because I really needed the money,” said freshman Julia Bonnet. “I cry everyday so why shouldn’t I get paid by the gallon to do so?”

Gatorade has been a best seller among university professors for a number of years. After the recent revelation, some staff are receiving backlash for their preference.

“I really don’t think it’s cool that my professor is drinking his students’ tears right in front of them,” said sophomore Jacob Weber. “Since we found out, he’s been bringing two Gatorades to class just to rub it in our faces.”

According to anonymous sources, professors receive a special discount when they buy Gatorade in bulk, since they’re so essential to production.

Wednesday’s press release didn’t go into details on how the tears are collected. The company guarantees that they only use 100% natural freshman tears, with only trace amounts of mascara.