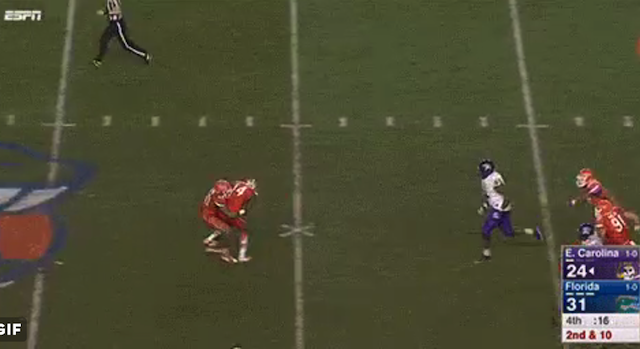 In the recent game against ECU, Florida Linebacker Jarrad Davis tackled not only his fears on the field, but also his teammate.

The team tackle, hailed as a smart play by sports experts, was only a small fraction of the problems that Davis faced and tackled in the Swamp.

“I was facing a lot of stress about the game, and about school.”

I just visualized all of those problems as my teammate Alex and tackled them. It was really quite cathartic.”

Reports indicate that Davis had been suffering from constant anxiety for weeks before the football event, and that facing his fears was inevitable. Apparently, his therapist, who wishes to remain unnamed, had told him earlier that week to just “tackle” his fears. Davis took the therapist’s advice quite literally.

The Crocodile’s wiretap in the therapist’s office revealed shocking information about the real source of Davis’ fears.

“He seems…I don’t know, dangerous. Like he could snap at any minute.”

We reached out to McElwain, who told us that he has nothing but “love and compassion” for the physical and emotional wellbeing of his athletes.

I’m glad that Davis defeated his fear of me out on the field,”

The consequences of the 200-pound, 6”1’ linebacker tackling 5”6’ McElwain himself would have been disastrous for the Gator football community.

Next week the Gators are set to play a new mystery quarterback, who is rumored be terrified of loud noises and fireworks.

Watch the next game with us in the Croc Block! Sign up here.