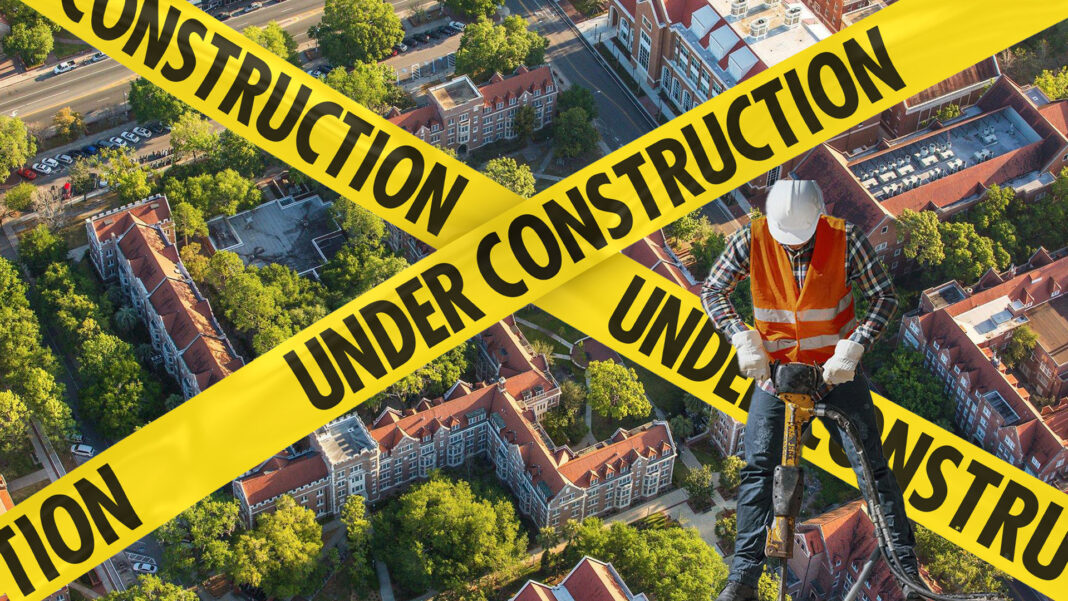 On Sunday, the University of Florida announced that they would be taking on another massive construction project. Said to be their most ambitious expansion yet, the project’s location was finally decided and voted upon by the UF Board of Trustees: the entirety of the UF campus.

“This is getting ridiculous. A Krishna building, a Gators Vs. Zombies building, a second Library West!?”

In addition to their plans for expansion, UF’s construction project includes renovations for beloved-but-outdated UF landmarks. First to be redesigned is the Turlington Potato, whose lumpy, unattractive figure is set to be remodeled into a smoother, more flattering Turlington Sphere.

UF has made it explicitly clear that their proposal for campus construction and renovation does not include any plans whatsoever to expand off-campus student parking. They actually intend to demolish the popular “Any Decal” parking lot outside Southwest Rec in order to make room for 4 adjacent Chic Fil A locations.

Also excluded from UF’s construction plans are Turlington, the Architecture Building, and the Little Hall bathrooms.

While development is underway, all dorm buildings, lecture halls, and UF facilities will be closed to both students and staff. Classes are to resume in fully virtual capacity until construction, which is set to begin this summer, is completed. UF has offered a soft deadline of Spring 2030.

“Yeah it’s a little frustrating to be taking Zoom classes for the entire duration of my college experience. But hey, at least my degree will be worth more when we’re top 5.”

In fact, students and faculty are advised against returning within a 5-mile radius of the school for the foreseeable future. The combined noise level resulting from campus-wide construction is estimated to exceed 150 dB – enough to stop the heart of a fully grown moose.

There have been increasing concerns by students and staff that shutting down the entire UF campus inadvertently extends to its essential medical facilities like SHANDS Hospital. Facilities that deliver top-of-the-line health care to those in critical condition.

“Do top-5 public universities have hospitals? No, they have updated, top-5 facilities to house small class sizes. If anything, SHANDS was slowing us down.”

Following UF’s announcement for expansion, the city of Gainesville unveiled their own construction plans. Starting next Fall, the entirety of Midtown will also be closed for construction.