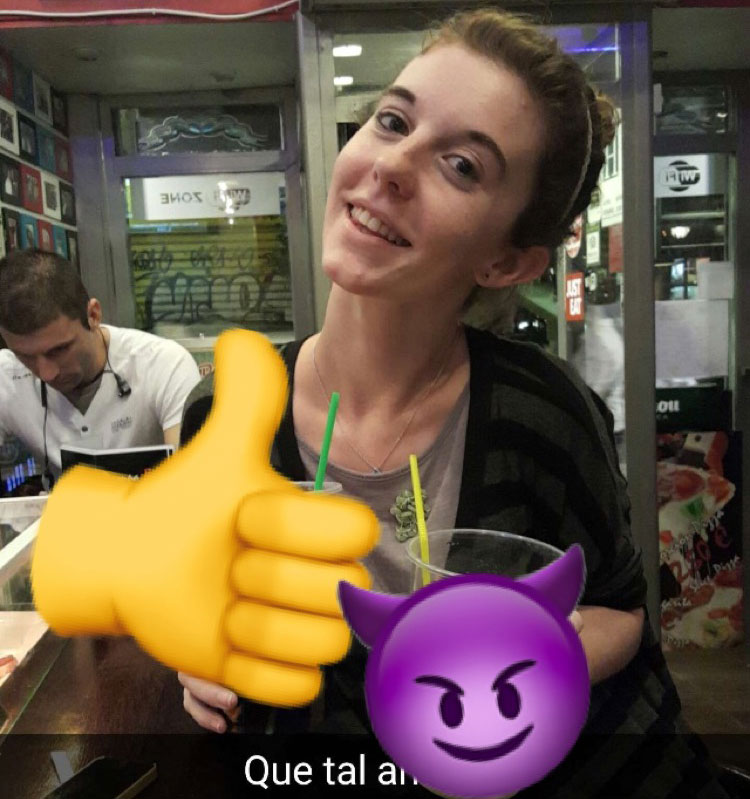 A popular vote by a group of Maria Rozo’s friends this past Wednesday has unanimously concluded that her placement of an emoji over a beer in her Snap story fooled absolutely no one.

The vote was taken after Rozo attended a ladies’ night event in midtown and posted a series of snapchats with some girlfriends, and appeared to be holding mysteriously large stickers and emoji’s in 99% of them.

“I wanted to post the pictures because they were cute, but ever since my cousins added me on Snapchat I’ve had to be careful not to post anything incriminating,”

“I saw a few friends do it on Instagram, so I decided to just follow suit and put a sticker of a rabbit wearing a crown over my rum and coke to be safe.”

Rozo said at first she felt good about her clever usage of the sticker feature on Snapchat, and the lack of angry texts from her aunts, mother and step-father indicated to her that it has done its job—but the response from her friends was slightly different. Zooey Carle, Rozo’s classmate, said that she thought the sticker was actually a dead giveaway that her friend was at least a little intoxicated.

“I get that she was trying to hide her Corona from her family in a cute way or whatever,”

Carle said, who prefers to hide her alcoholic beverages in Vineyard Vines coozies.

“But let’s be honest, no one actually uses the sticker option on Snapchat unless they’re three tequila shots in or their baby cousin took their phone.”

Rozo said she received a similar reaction from most of her friends, who also mocked her for trying to hide her beverage in such an obvious way. Rozo said she doesn’t mind the teasing so far, but that she is nervous to see how they respond to the Instagram picture with her ex-boyfriend’s face and arms cropped out.