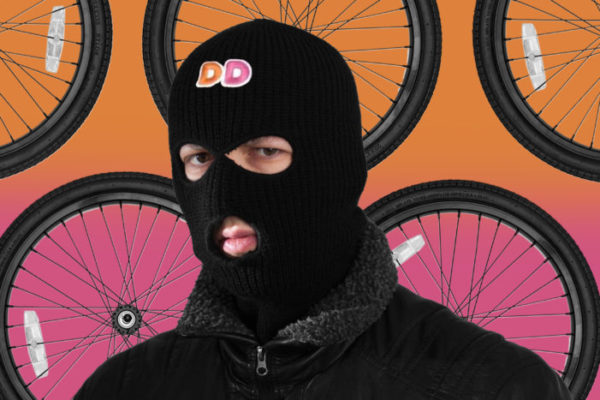 In the latest case of coffee-on-coffee crime on campus, the Starbucks Bike has been left without any tires less than a week after its introduction.

Starbucks has six locations on UF’s campus, not taking into account the new Starbucks Bike. Meanwhile, Dunkin’ only has two unfrequented stores across from Library West. The recent launch of the Starbucks Bike has put tensions between the chains’ employees at an all-high. This era is already being compared to when Starbucks introduced cake pops, which all but incited a coffee war

In an act of rebellion, Dunkin’ employee, Joe Brewson, 21, dismembered his rival’s new “store” by stealing all three of its wheels, leaving the bike overturned and dripping cold brew outside of the Hub. Florida students, who were completely devastated by this crime, resorted to just waiting in line like any other day.

“Oh. Guess I’ll just go to Marston. Or maybe West. Actually, the Reitz is on my way anyway. That’s sad, though,” said Emma Apathee, when we stopped her for a comment.

Brewson who was rejected for a job at Starbucks, reports that he was able to steal the tires in between customers while on the clock.

“I was just so tired of hearing about their stupid Nitro Cold Brew. They said it tastes like ‘velvety cream.’ What does that even mean? Also, since when are they above using ice? What’s wrong with ice??,” said Brewson.

As for how the Starbucks bike will recover after such an incident, we are not completely sure. President Fuchs has announced that new tires will be salvaged and reused for the store from the abandoned bike lot, but will this be enough to bring back the store to its original beauty? We’ll just have to wait and see.