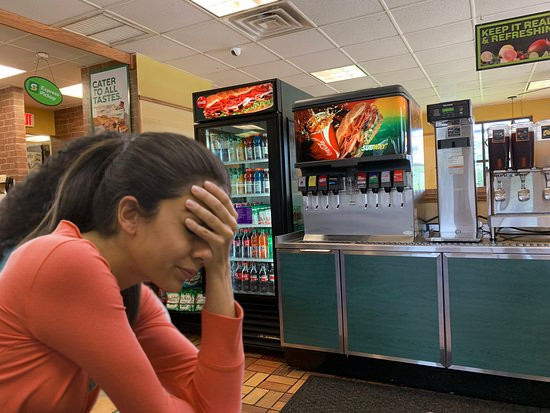 A geology sophomore was recently spotted at the Rawlings Subway, the saddest Subway of them all, a full five days in a row.

“I like ordering the veggie patty with no toppings. The bland monotony reminds me of my life,”

Research studies by the university have shown that subjecting yourself to on-campus Subway while sober is one of the major symptoms of psychological distress – with another major symptom being the voluntary registration for a 7:30 a.m. class.

“This girl is always in here eating sandwiches, in silence, while looking at Facebook memes on her phone,”

“She doesn’t even laugh at the funny memes, she just does this thing where she exhales extra hard through her nostrils while she eats Sun Chips. It’s honestly a pretty sad sight to see.”

Path’s friends said they were planning on launching an intervention in which they will feed her a Publix sub, hoping the holy food will free her from her inner demons and guide her on a path to salvation. However, they’re waiting for the subs to go on sale first.

“I guess I could just go to the CWC, or The Infirmary or something.”

Path said, attempting to sip her soda through a half-dissolved Subway paper straw.

The most recent reports show that in the past weeks, Path visited not only Subway once a day – but had also visited Chomp It more than once (willingly). Since then, Path’s Gator1 was deactivated by Gator Dining Services for suspicious activity.