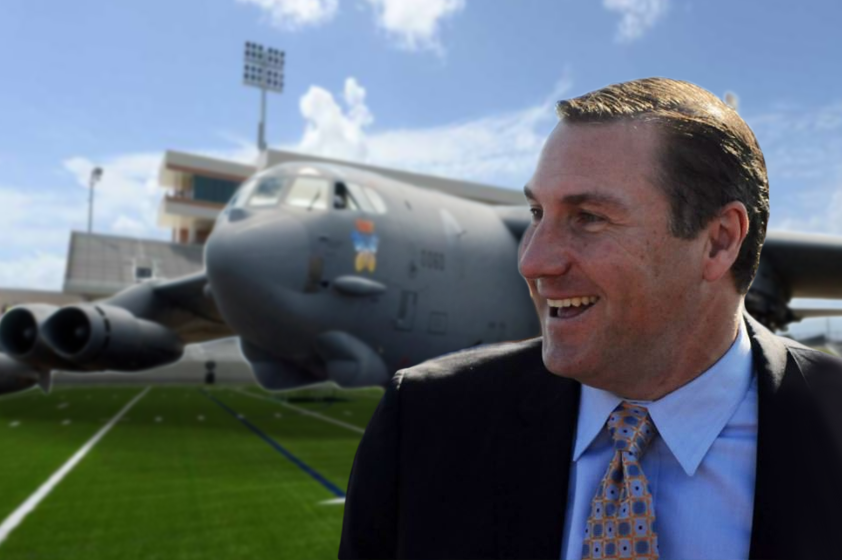 In preparation for making his final case to students, Mullen has been taking flying lessons at the Gainesville airport over the last month. Critics had questioned why he was spotted learning to operate various aircraft when other coaches were focused on recruitment. Mullen is hoping that the extensive efforts will pay off soon.

“The staff and I wanted to get the Jordan logo plastered on the jet, but that wasn’t feasible given the time constraints,” said Mullen. “Hopefully my Official Gator Jordan™ and landing on the field is enough to give Jason an understanding of the ‘Gator Standard’.”

Montclair, who registered 39 sacks during his senior year, was initially unsure of who was paying him a visit. He reported feeling slightly worried and intimated when the jet pulled up, though he was eventually charmed by the coach’s distinctive power play.

“It’s the most unique thing I’ve seen a coach do. It’s flattering how much he wants to impress me,” said Montclair. “What really won me over was those Jordan’s though. Those are tight.”

As Signing Day nears, Florida State head coach Willie Taggart is also expected to take an in-home visit with the local phenom. He plans to convince Montclair of the Seminoles’ rising potential, even as their class rankings continue to drop after a disappointing 5-7 season.