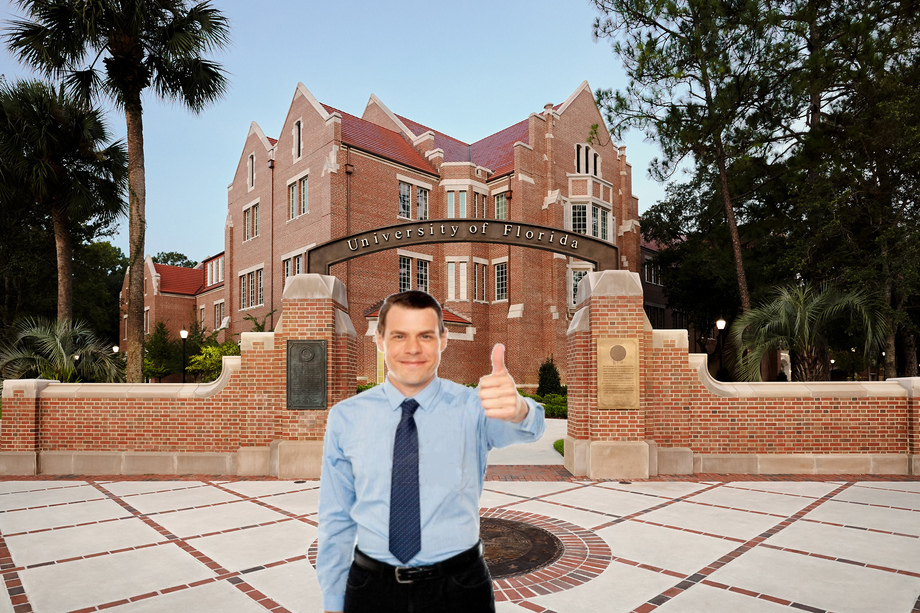 Eight puns, two knock-knock jokes, three FSU jabs, two elbow nudges, and one practical joke later it finally happened. Someone on the campus tour laughed at one of that kid’s dads’ jokes.

“That was the hardest I’ve seen someone try to get a laugh on a campus tour since that improv group alumni came.”

The man’s son was identified as Jerry Anderson, a future Liberal Arts major and sandwich artist. Jerry’s dad was identified as ‘Garry’ by Jerry. The joke that received the hard-earned laugh was reportedly an extremely original pun revolving around President Fuchs’ name and a certain expletive.

It is rumored that Garry has been taking his son Jerry on hundreds of different college tours just so he could practice his comedy routine, despite the fact that Jerry actually enrolled at the University of Phoenix after Michael (who is also a University of Phoenix Cicerone) gave him a tour.

“I decided an online school was the only place my dad couldn’t embarrass me,”

Said Jerry, who was wrong.

Coincidentally, there happened to be a Comedy Central executive on the same campus tour as Garry. The executive, Barry, immediately signed Garry to an hour long stand-up comedy special.

“Here at Comedy Central, we’re really impressed whenever someone can get another human being to laugh,”

Said Barry, who had previously had a job collecting screams via the Monster’s Inc. method.

“Especially a millennial, which not even our extremely qualified Board of Humor Directors has been able to figure out.

Garry’s comedy career is now expected to follow other great comedic dad minds. He has already signed on for two Adam Sandler movies and one guest appearance on The Big Bang Theory.

The student who first laughed at Garry’s joke and launched his comedy career told our reporters that he was glad to be able to make someone’s dream come true, but in actuality was laughing at the thought of a Tweet he had seen 4 hours ago.