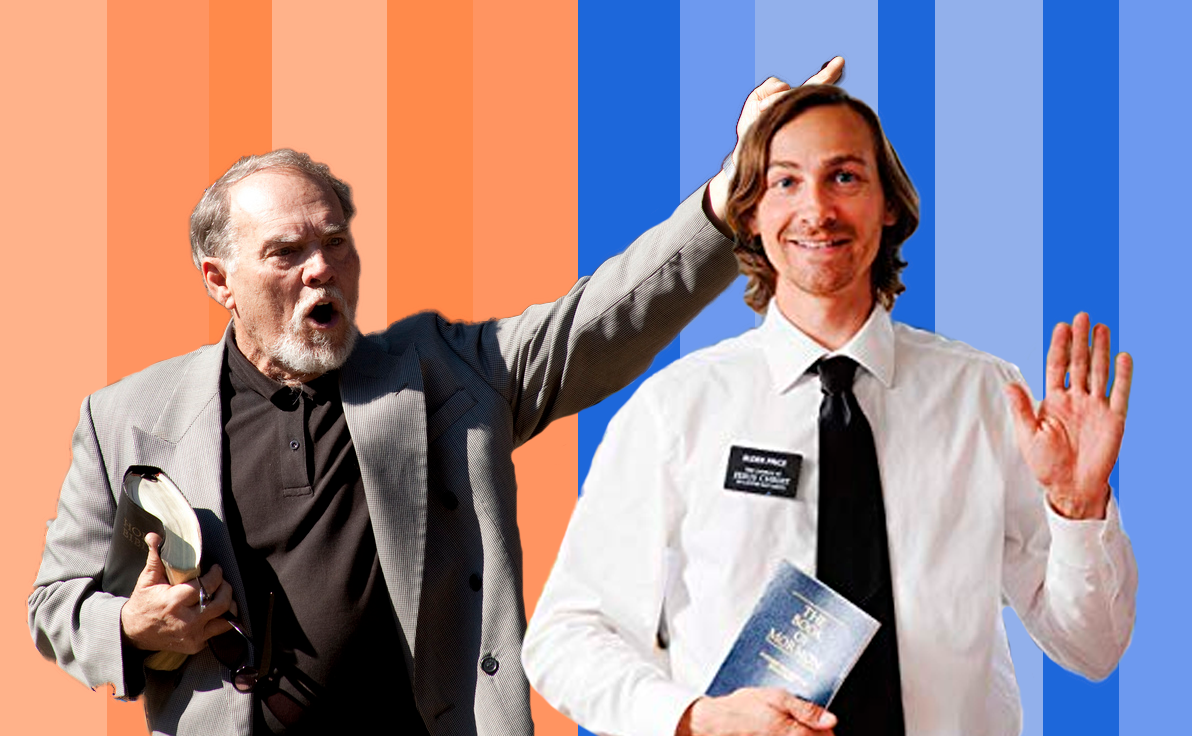 A three-hour religious debate which erupted in Turlington Plaza between Jehovah’s Witness missionary Jethro White and Mormon preacher Josef Smithson ended in two tearful religious conversions. However, no students adopted faith as a result of the event. Instead, the two devout followers managed to convert each other to their respective former religions.

The newly-converted Jehovah’s Witness Smithson immediately began to testify about his newfound faith to passing students.

“Before I became a Witness, I really missed the preaching door-to-door. It’s an easy choice to trade holidays for that,” said Smithson.

White, now a Mormon, experienced somewhat more trepidation from his conversion, confessing to the Crocodile,

“Because the church shuns ex-members, I might have to go into Jehovah’s Witness Protection.”

However, he looks forward to celebrating Christmas and his birthday for the first time in his life, and to learn all about his new religion from the accurate and informative Broadway musical, The Book of Mormon.

Smithson and White plan to meet weekly to mentor each other in the practice of their former religions, as they both wish to become experts and then quickly return to saving the souls of students in Turlington Plaza as soon as possible. Until then, the learning curve is steep. White, briefly forgetting he had recently joined the Church of Jesus Christ of Latter-Day Saints, had almost convinced a stranger to become a Jehovah’s Witness when he remembered his new alignment, and just told the student to “forget it” and “go to hell,” which he now believes in.

Despite still holding opposing doctrines within alternative end of the Christian region of the Judeo-Christian religious spectrum, the two have formed an unlikely friendship. In the midst of their on-going but now reversed religious arguments, White and Smiths on have forged a lasting connection.

Looking to the future, the friends plan on working together to impede a greater amount of Turlington traffic between the two of them, and to branch out to the Plaza of the Americas to try converting some Krishnas.