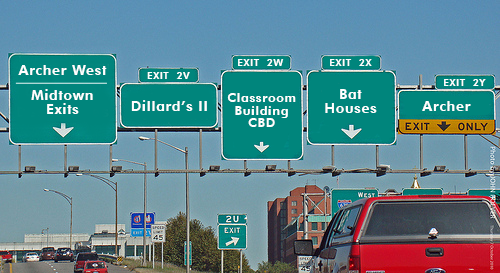 For years, the residents of Gainesville have been brainstorming how to reduce traffic on and around Archer Road to no avail. The conundrum was finally solved last week when the Gainesville Planning Committee voted 10-1 in favor of expanding Archer Road to 14 lanes. Committee chairman Randall O’Houlihan said it was pretty easy to come to a decision, despite convincing arguments by other members of the committee.

“We all came into the meeting knowing Archer had to be expanded by at least 6 lanes, but how were we to know when to stop?,” said O’Houlihan. “Jeff even voted against the measure because he thought we weren’t going far enough.”

O’Houlihan said all the usual talking poinits were covered, including implementing Sun Pass tollbooths, making scooters use the bike lane, and completely eliminating the speed limit.

While residents of Alachua county will probably see an increase in taxes to fund this project, many have indicated the project is worth the cost. Long-time Gainesville resident Jim-Bob Jackson said he’s been waiting his whole life for this moment, and will patiently wait for it to be completed.

“We knew this day would come,” said Jackson. “It may not be completed in my lifetime, or my childrens’ lifetimes, but we’re making the city a better place. Knowing that my grandkids might one day be able to cross seven lanes of traffic without a turn signal is enough for me.”

Until the construction is completed, an estimated 60 years from now, Archer will be reduced to 2 lanes on either side.