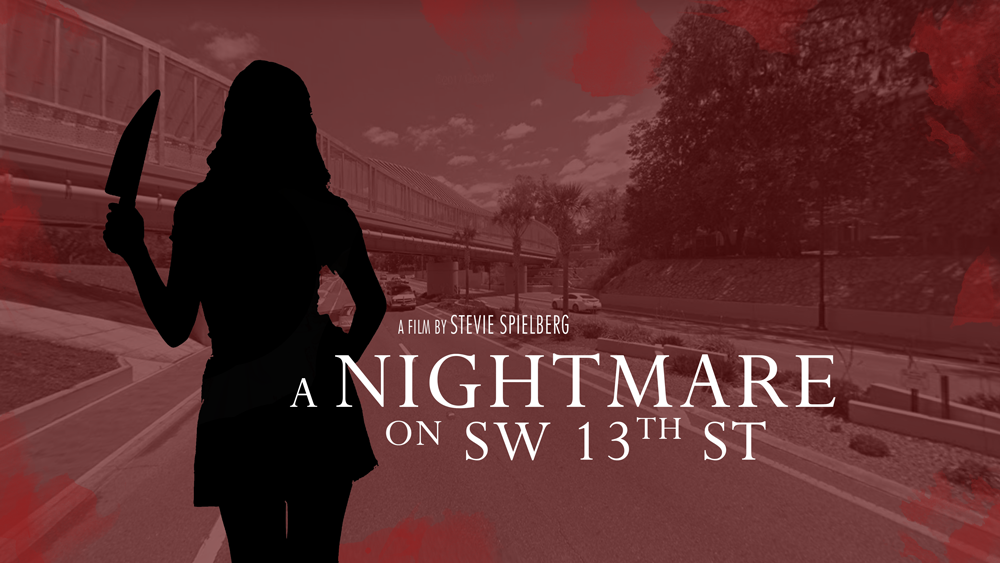 New Line Cinema has begun filming of their new horror film, “A Nightmare on SW 13th Street”, on site at the University of Florida. Details of the film remain shrouded in secrecy, but Director Stevie Spielberg (no relation) was willing to answer questions about the project. Director Spielberg, known for the hit films “Titanic 2: Revenge of the Iceberg” and “Help, My Computer is Haunted!”, has turned his spooky gaze onto Gainesville.

“I’ve always wanted to do a college-themed horror movie, and after being in Gainesville for a few hours I knew this was the place to do it,” said Spielberg.

The film takes place on SW 13th Street during the week of Halloween. A mysterious creature lurks on campus, frightening UF students in their dreams by using their greatest fears. Director Spielberg strived for realism with this film by hoping to find what scares University of Florida students the most.

“I asked around to see what kind of stuff is scaring Gator kids these days, and the answers surprised me. This film will really capitalize on everyone’s fears of failing biochem, crashing their scooters and emotional intimacy.”

Some local students remain resentful of Hollywood’s representation of their campus. Sally Smith, a sister of Alpha Chi Omega and a film buff, hopes the movie bombs at the box office.

“Honestly, it’s one of the dumbest ideas I’ve ever heard,” Smith said. “There’s nothing scary about this area… If they wanted to really see something terrifying they should’ve filmed on I-75 during rush hour.”

With talent like Brendan Frasier and Nic Cage to star, and with an estimated budget of $200, this film is looking to be the smash hit of 2019.